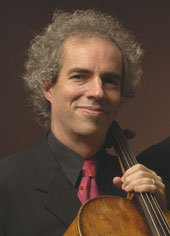 John Moran, Kindler Cello Society president, is a native of the Washington, D.C. area, appears regularly as soloist and chamber musician on baroque    and classical cello and viola da gamba on both sides of the Atlantic. He received his professional training at the Oberlin Conservatory and the Schola Cantorum (Basel, Switzerland).

After a decade in Europe where he appeared regularly with groups such as The Consort of Musicke, English Baroque Soloists, Les Musiciens du Louvre, and Ex Cathedra, he returned to America and where he has played with the Violins of Lafayette, Capriole, Trio Riot, the Smithsonian Chamber Players, the New York Collegium, the Boston Early Music Festival, and the Washington Bach Consort, among others. He is artistic director of the Washington, DC-based period instrument orchestra Modern Musick and is on the faculty of the Peabody Conservatory in Baltimore. Recording credits include Dorian Recordings, Bridge Records, Virgin Classics, Deutsche Grammophon, ERATO, ATMA Classique, Hänssler Classic, Deutsche Harmonia Mundi and Musica Oscura.

Dr. Moran is a contributor to the revised New Grove Dictionary of Music (2001) and reviews books on musical topics for various journals. He is writing a historical monograph on the cello for Yale University Press. Other interests include linguistics and architecture. He and his wife, violinist Risa Browder, have two sons who pursue musical and other interests.

Advisory Board Members
Powered by